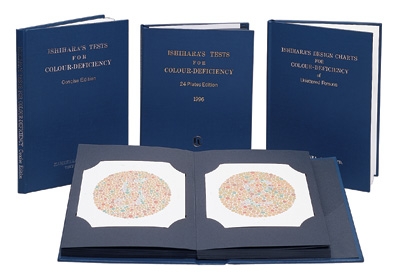 Accepted by leading authorities as a simple and accurate method for discovering congenital color blindness and red-green blindness, each in two forms, complete and incomplete. Includes four special plates for tests to determine the kind and degree of defect in color vision. Makes use of the peculiarity that in red-green blindness, blue and yellow appear remarkably bright compared with red and green. Color plates encased in specially designed album-type books for ease of handling. Detailed instructions included.

What is colorblindness?
Color blindness (color vision deficiency) is a condition in which certain colors cannot be distinguished, and is most commonly due to an inherited condition. Red/Green color blindness is by far the most common (99%) form and causes problems in distinguishing reds and greens. Another color deficiency Blue/Yellow also exists, but is rare (1%) and there is no commonly available test for it.
There is no treatment for color blindness, nor is it usually the cause of any significant disability. However, it can be very frustrating for individuals affected by it. Those who are not color blind seem to have the misconception that color blindness means that a color blind person sees only in black and white or shades of gray. While this sort of condition is possible, it is extremely rare.
The Ishihara color test is a test for color blindness. It was named after its designer, Dr. Shinobu Ishihara (1879-1963), a professor at the University of Tokyo, who first published his tests in 1917. It makes use of the peculiarity that in red-green blindness, blue and yellow appear remarkably bright compared to red and green.
It consists of a number of colored plates, on each plate is printed a circle made of many different sized dots of slightly different colors, spread in a random manner. Within the dot pattern, and differentiated only by color, is a number. What, or even if, a number is visible indicates if and what form of color blindness the viewer has. The full test consists of thirty-eight plates, but the existence of a deficiency is usually clear after fewer plates. The Ishihara Color Charts are accepted by leading authorities worldwide as a simple and accurate test method.
The color plates are available in an album-type book for ease of handling. The books are printed in Japan and are protected by international copyright. Graham-Field has been the exclusive North American wholesale distributor of Ishihara Tests for over 30 years.

See what our customers have to say:

I have been working with WorldWide Medical for over 10 years, their service is as good as anyone I have worked with in the industry.

Email us at brent@wwmdusa.com. Fill out the form below and we will get in touch with you.